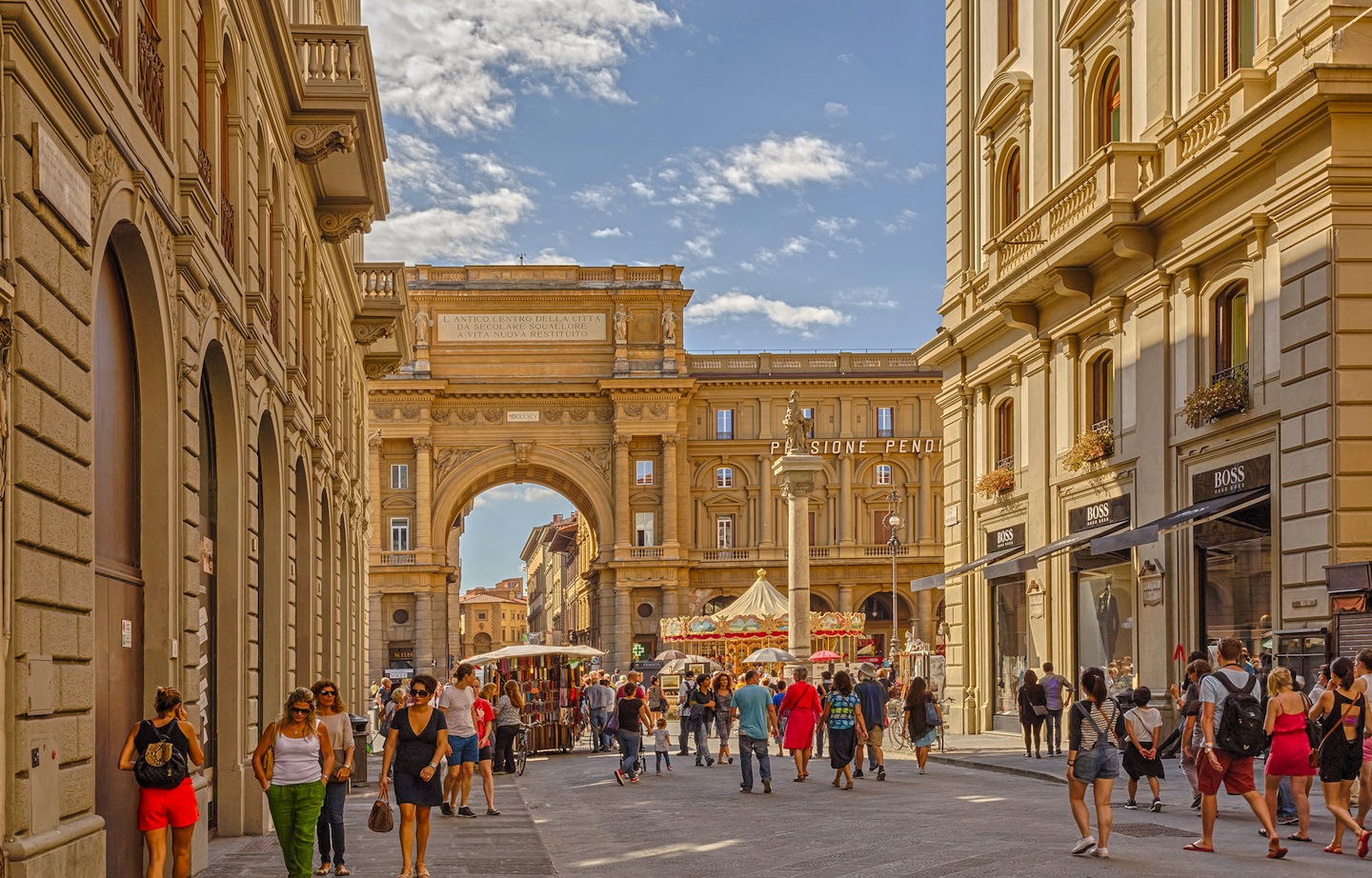 Three Florence tours to discover the hidden faces of this infinity city, where the union of history, emotions, ancient stones and a river create a living urban body.

Lungarno Corsini. The sun is about to make way for the moon, while from the inside of the bar a jazz tune spreads cheer in the reddish sky above Florence. My guest comes on time: sweet smile and jaunty hair. She sits down, orders a fresh orange juice and begins to tell me about herself, her Romanian origins, and her arts university studies that lead her to Tuscany, twenty years ago. 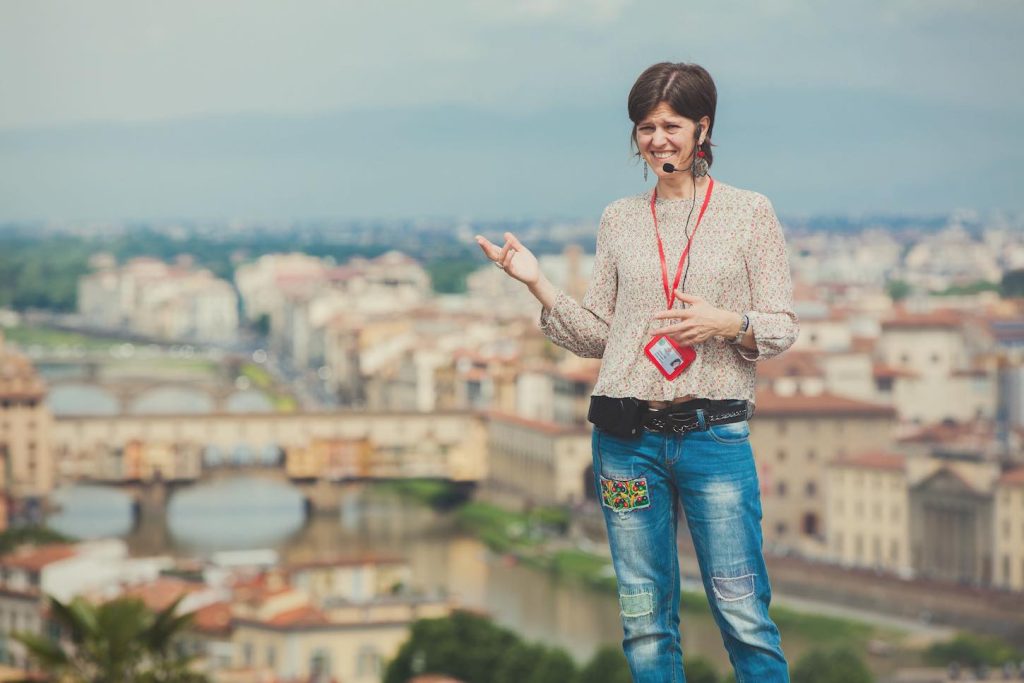 But destiny was already written yet before she decided to follow her dream of studying art in the cradle of the Renaissance. Namely, it was written in her name. She is Loredana Bobinca Berbece, an unique tour guide in love with Florence.

The story of Loredana

Loredana arrived in Florence after studying history of art at the University of Siena, where she graduated with a dissertation dedicated to the Renaissance. After becoming a licensed tour guide, since 2011 she has been taking tourists to explore the city that has become her second home and of which she knows every secret corner. It is on this basis that Loredana builds her guided tours, capable of accompanying the visitor in the discovery of the unusual angles of one of the most beautiful cities in the world. Which is so tiny, but extraordinarily rich in history. Each itinerary is based on meticulous historical research, the result of valuable testimonies collected from the narrow Florentine streets, flanked by thorough site inspections from one monument to another.

Passion and professionalism led her on the tracks of Florentine history, opening the doors of a Florence different from that already presented to tourists. “Are your itineraries unique in the Florentine tourist offer?” I ask. Loredana shrugs and smiles. “I think so – she admits – The goal is to offer the public an extra value to their experience of discovering the city.”

Between unusual Florence tours, Stone Women is the itinerary that connects the women to whom the city of Florence has bestowed a monument: it starts at Porta Romana to continue illustrating the city, with a magnifying glass on the Medici family. “The journey is animated by actress Laura Pierantoni, who reads some passages about the lives of these Florentine women or of those who have lived in Florence, such as Elizabeth Barrett Browning, Mary Ann Evans. And obviously there is the Beatrice mentioned by Dante Alighieri” says Loredana. 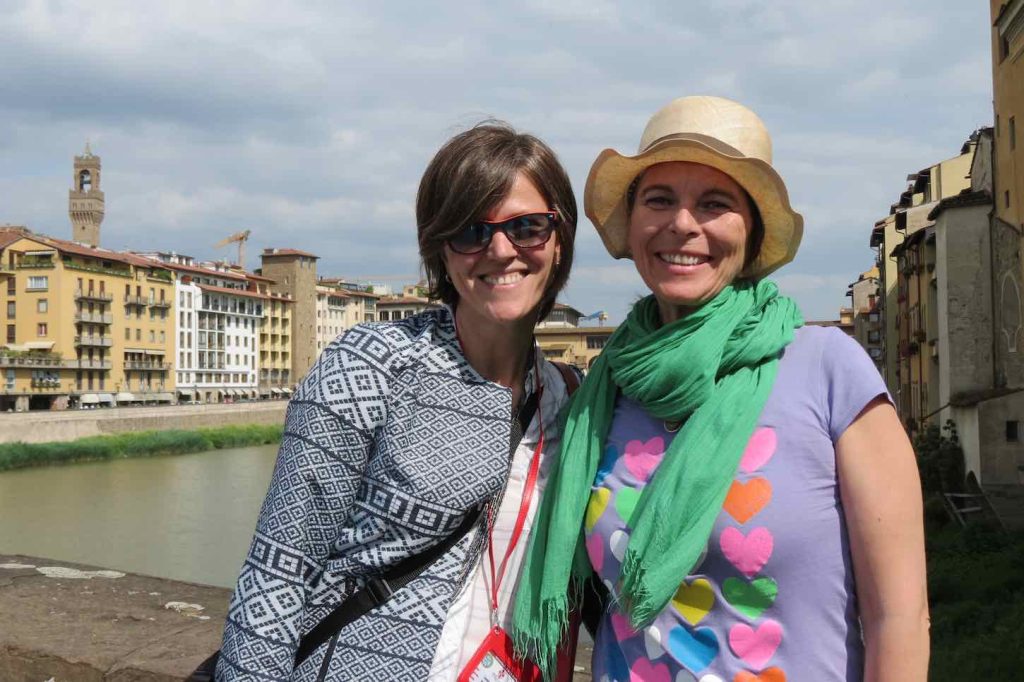 From Via delle Belle Donne (literally, Street of the Beautiful Women) to Piazza della Passera, from the story of Joan of Austria to Bianca Cappello (first lover and then wife of Francesco I of the Medici family) in Via Maggio. The journey that Loredana creates for me, using photos and lithographs, is not only a tribute to the women of Florence. Her itinerary is filled with anecdotes and stories of the city corners undeservedly little known to the general public and to which Loredana returns that identity overshadowed by the more famous artistic heritage. I finished my juice, while Loredana’s is basically still at the edge of the glass. I keep listening to her and order another juice: in front of me is a deep well of knowledge, passion and love for Florence.

Florence tour: The Liberation of Florence 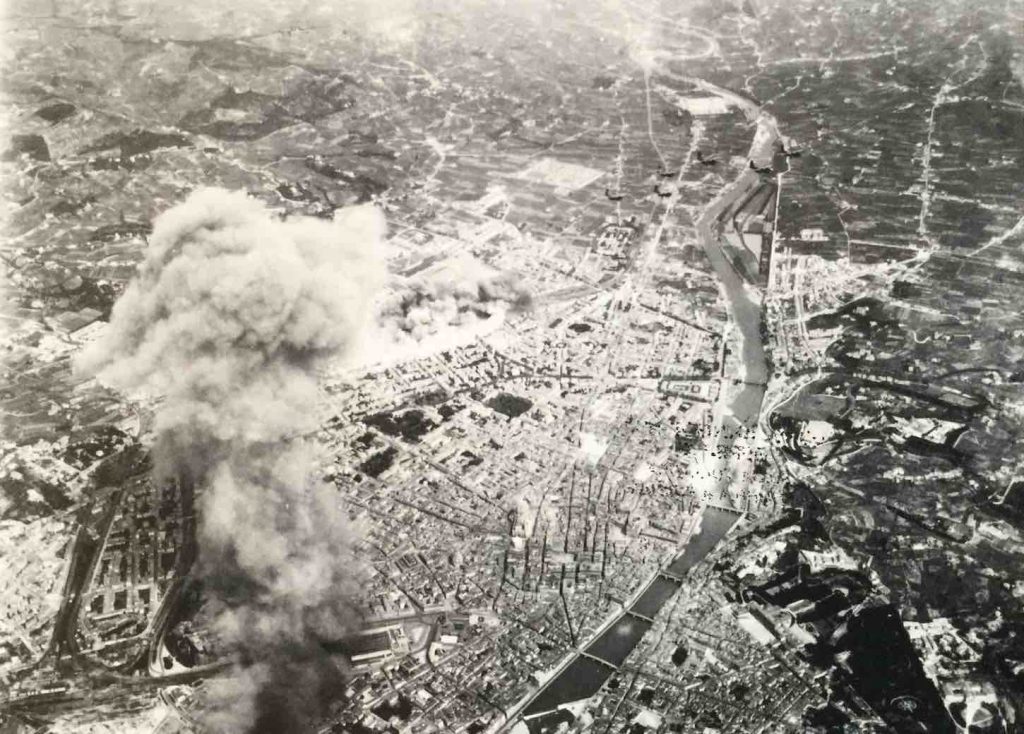 And now some things about the Florence tour dedicated to the liberation of the town after the Second World War. Loredana introduces the itinerary, showing me historical documents that she also shows to her visitors with the help of digital devices. “These are photographs that I bought, photos taken by the Germans and American soldiers for propaganda purposes. So pictures that are different from those that we are used with and that are more widespread: I chose them
because I think that History should be told making the tourists experience the Florence of that time“. 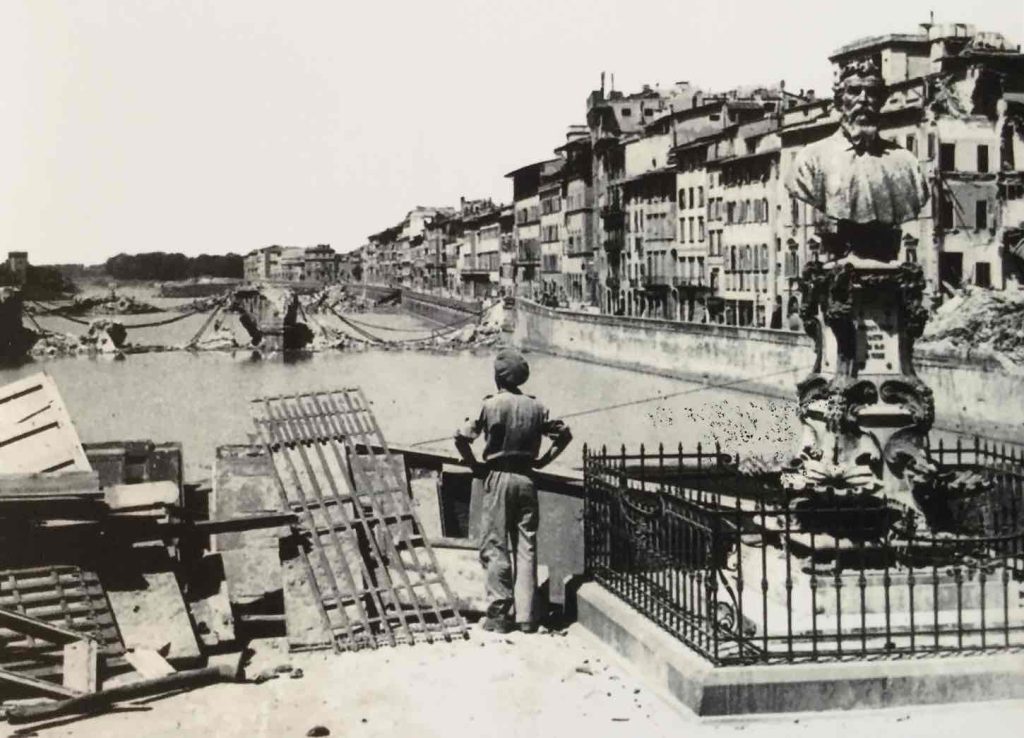 The itinerary passes through the bombed areas, introducing with small steps back in time, the years of the devastation of the artistic heritage that struck one of the most beautiful cities in the world. “During the tour I not only narrate historical anecdotes, but I also show how the appearance of the city has changed in terms of architecture.” And all this, in three different languages depending on the nationalities of the tourists group. In fact Loredana is fluent in Romanian, English and Italian. I could also add a fourth, since I am hearing the unmistakable Tuscan accent. Loredana, I have to say that you’re a big entertainer! I am increasingly excited and curious to know what else you have in store.

More info on: The Liberation of Florence

Florence Tour: The flood of ‘66 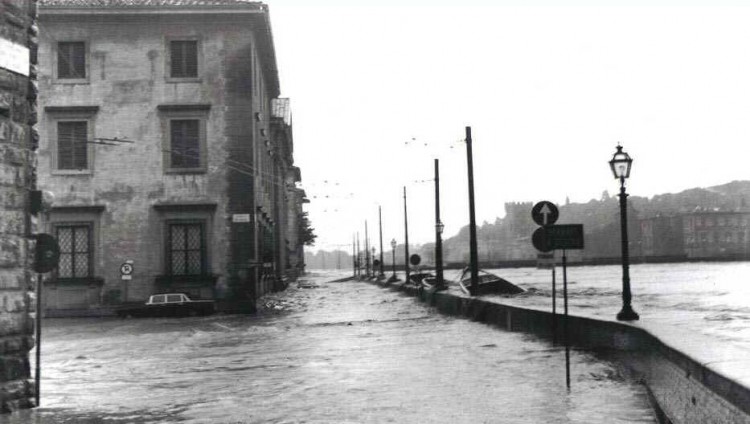 Finally, between the unusual Florence tours we discover that one dedicated to the flood of Florence, which on Friday, November 4, 1966 severely hit the historic city centre and the entire basin of the Arno River. “Since 50 years have passed from the time when the flood hit Florence, I decided to offer more tours that cover first a full day and then two half- days, for a total of three days.” Loredana reconstructs the drama of the city through the testimonies collected by the Florentines. Accompanied by their memories, the tour begins recounting the last days of October and the first of that terrible November, characterized by violent and intense rainfall. 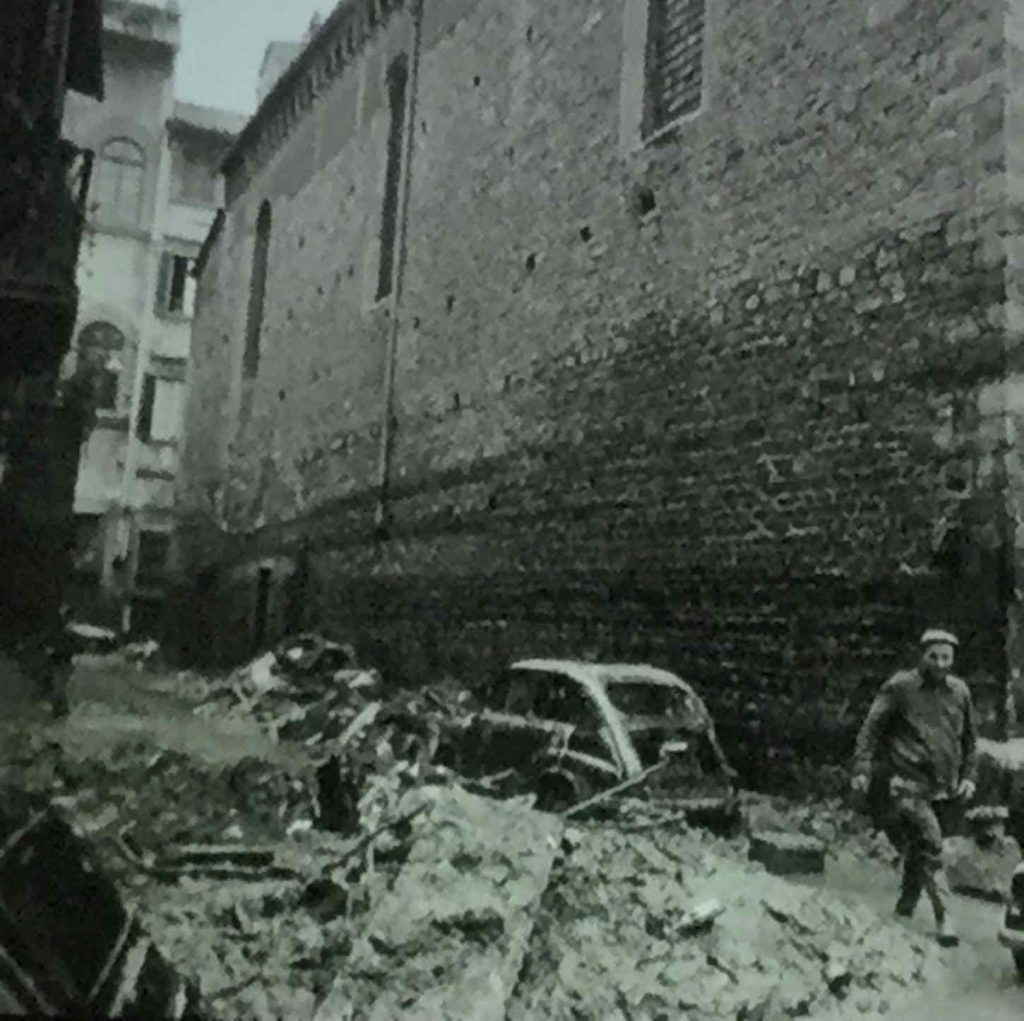 At 4:00 am, the Arno River invades the Lungarno Benvenuto Cellini and Via dei Renai and then submerges the districts of San Niccolò, Santo Spirito, San Frediano and Santa Croce. “This Florence tour is a journey into the flooded city, including anecdotes and testimonials until the tourists arrive at the restoration laboratories to analyze the damage done to the works.”

More info on: The Flood of 1966 Florence beyond the Renaissance

We are far from the usual Florence tours dedicated to the artistic heritage that crowd the city every day. The offer of Loredana differs considerably, accompanying visitors to the discovery of three deeply intimate aspects of Florence, starting from stories, injuries and vivid memories in the memory of the city. Three aspects, endless stories and at least five reasons to choose one of her tours.

First of all, undoubtedly, the opportunity to discover an unusual Florence. Among other qualities of her tours, there is the extensive documentation, hardly available on the market or in the classroom. 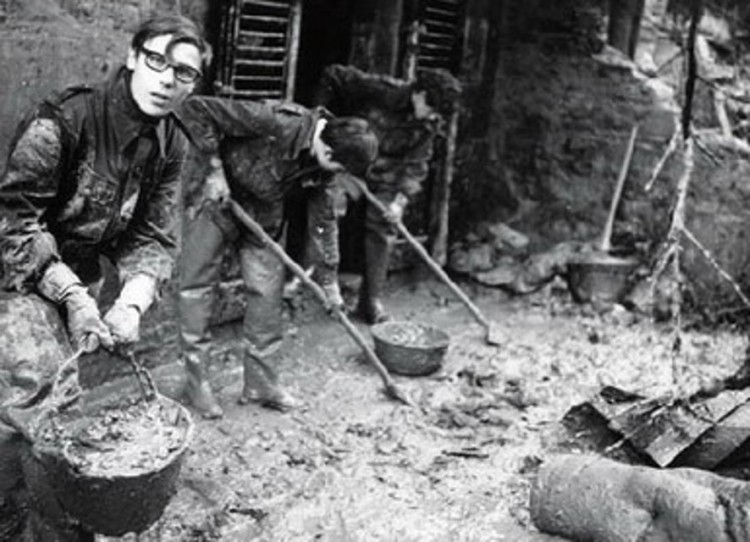 Last, but not least, the linguistic ability of Loredana in moving with flexibility and ease from one language to another. Even the food and wine that Loredana offers at the end of each tour definitely awaken the curiosity. And finally, it is possible not to get infected by her passion, her enthusiasm and sweetness of her smile? 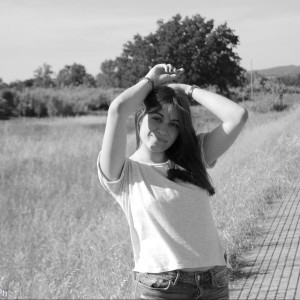 TuscanyPeople, People and Stories from Tuscany